A Pattern Book of Cádiz Ornaments

In 2013 I designed a couple of typographic ornaments while thinking of the pavement designs around the city hall in Cádiz, Spain. The ornaments were not intended to be reproductions of any specific pavement designs, they were simply prompted by the memory of a lovely day walking around Cádiz. I included the ornaments in the type specimen at the end of Pressed for Time but never did much else with them. 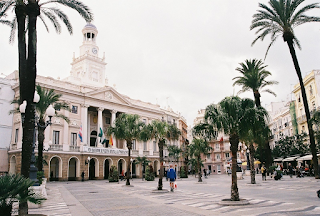 
Then in 2019, as I was working on a book of Sandra Kirshenbaum’s writings, I asked Ed Rayher to engrave and cast the ornaments to use on the book’s end sheets (see From the Editor: The Selected Writings of Sandra Kirshenbaum. San Francisco: Book Club of California, 2020.) Once the metal ornaments were in my hands, I realized that they could be assembled into many more combinations than I had originally imagined. I began to think about a small specimen book.

Five days after returning from the publication party for From the Editor, the whole country shut down in response to the COVID-19 pandemic. Knowing that the larger collaboration with Carolee Campbell I had been planning would be delayed, a small ornament specimen seemed like the perfect interim project.

Many of the Cádiz patterns I was designing reminded me of textile designs and, unlike my book Ornamental Digressions, I initially wanted the Cádiz book to starkly emphasize the ornaments’ patterning structure, rather than to concentrate on potential color applications. I thought of early embroidery pattern books, in which the patterns are printed in black ink, as a model for the book that I wanted to make. 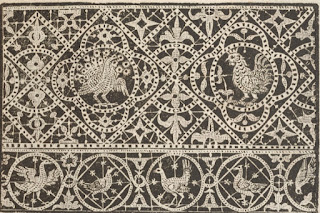 
I soon encountered two problems, both growing out of my innate obsessiveness. As I set the patterns into type, I became convinced that I needed to show every conceivable combination of the ornaments. Distinctions as slight as showing the same pattern rotated 180 degrees seemed critical to the book’s success. Because of this the book ballooned into something that was simultaneously too much and not enough. When I finally changed tack, I was already up to seventy different type formes. Definitely not a small specimen book (more on this later), and certainly not an engaging narrative progression. 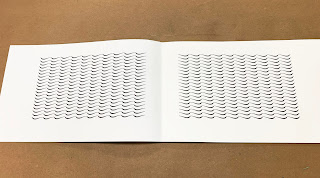 As part of my bookmaking process I always need to break through a certain amount of thickheadedness before I can get to where I want to be. In the case of this book the breakthrough happened while showing the prints to Annie. After looking through my endless permutations, Annie suggested that I might not need to show every combination, that in fact it might be a more engaging book if there was a bit of surprise, a little variety. This may sound obvious now but, once in it, it can be very hard to see over the walls of a design rut.

At the same time, I was losing faith in the strictly black and white design. Even after discarding extraneous patterns and changing the order of those that remained, I found it boring to page through the book. (For those interested in making books: it is never a good sign if you are bored by your own book.) While casting about for a solution I remembered a large collection of vintage Moriki handmade paper I had acquired when New York Central Art Supply went out of business. What if I printed the patterns in silver ink on alternating sheets of navy and burgundy paper? That would jazz up the book. I couldn’t be accused of making a boring book if it was printed like that! 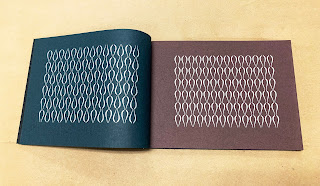 I pulled some proofs and made my binding model. I was all set to begin printing when I developed a persistent variety of nausea caused by trying to break the unbreakable rule: you can’t go home again. Even though I liked the silver/navy/burgundy design more than the black and white version, the new book felt exactly like something I would have made in the 90s. Just looking at it conjured all kinds of bad memories from my twenties, never mind the aforementioned nausea. And besides, once I stripped away the colored paper and silver ink, wasn’t it still the same repetitive, stagnating narrative as the first book? Each page eventually felt like every other page. I craved movement but designed stasis instead.

Finally, the stagnation broke when I realized that I was concentrating on how the pages looked rather than what I wanted the book to be. And what I wanted was a book that felt like a salesman’s swatch book, something assembled from different shapes and sizes, that showed potential without being restrictive, that was not too neatly put together, that had a bit of randomness to it. I began looking through my flat files and found all kinds of vintage papers, none of which I had enough to print an entire edition. They would be perfect for this book. My first go at the new design was a five-signature book that was going to require nearly 100 press runs. But it was what I wanted, labor be damned!

In mid-March 2020, I set to work printing the first press runs, realizing at the end of each day that I felt very tired. Unusually tired. One week later Annie and I were both diagnosed with COVID-19. That experience, and the ensuing treachery carried out by the Republican party—both in their handling of the pandemic and their attempt to illegally steal the presidential election—changed my creative priorities for the next year.

The positive result of this period was having my student Sarah Moody come live with us for three months while we printed the Three Constitutions. When we finished that book, I suggested to Sarah that she move to New York and continue to work for me part time until the Ninja Press Bibliography was ready to print (the previously mentioned collaboration with Carolee Campbell), at which time she would switch to full time work. For those part time months, the specimen book was the perfect project. I set Sarah the task of changing my five-signature dummy into a single signature of a mere 41 press runs. (After printing the book, I realized that some of the sheets had an unacceptable level of show-through. Rather than discard these sheets, I added an “Appendix,” a second signature in which the sheets could be seen, but at a remove from the rest of the book. To make this happen required a final, 42nd pressrun. Not exactly a small specimen book….) Some rough pictures can be seen below.

In addition to the Cádiz ornaments, the book is set in my Baker and hungry Dutch typefaces, making it the second book I’ve printed entirely from metal typefaces that I have designed. (The first being The Book of Jonah from 2012.)

A Pattern Book of Cádiz Ornaments will be available in a week or so on my website, russellmaret.com. 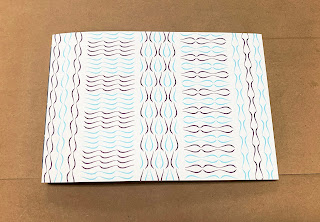 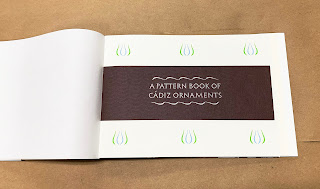 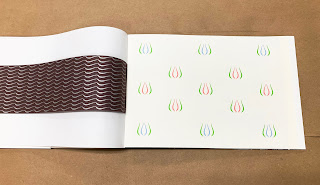 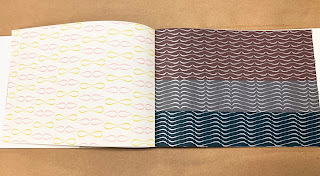 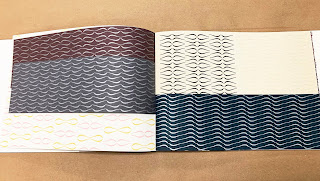 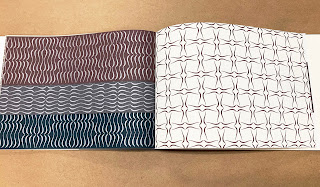 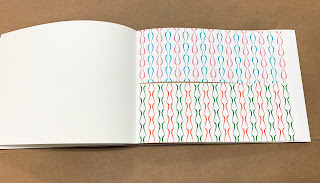 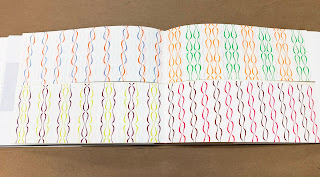 Posted by Russell Maret at 4:14 PM