Some Problems with Red

A couple of weeks ago I began printing a new book called Some Problems with Red encountered by Russell Maret while daydreaming in his studio and here explored with the aid of multichromatic letterpress. The book consists of five short texts dealing with the difficulties of describing and reproducing color, each of which is paired with an illustration. As suggested by the title, the book is a whimsical project that grew out of my "General Color Theory" from Æthelwold Etc., and continues my recent exploration of alternatives to the photo-polymer image making techniques that I have been using for the last eight years. Four of the five illustrations are printed from linoleum, end-grain maple, or metal type ornaments, while the fifth is drawn in ink with a compass. I should be done with the printing by the end of February, with the book debuting at the Manhattan Fine Press Book Fair on April 9.

Like many of my texts, the core of Some Problems with Red was written on envelopes and napkins after waking up in the middle of the night. Below is the initial draft of the first text in the book, dearly in need of editing. 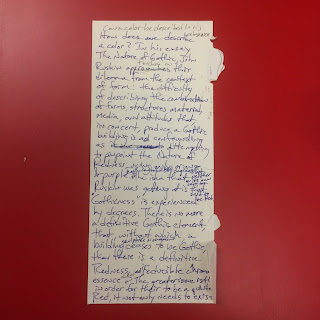 The text is hand set in Stymie Medium, a typeface that in the best circumstances is difficult to use. Its letterforms are wonderfully open and diverse—with a sizable compliment of alternate characters—but the typeface requires a considerable amount of massaging to bring out its letters' best qualities. The eccentric frankness that attracted me to Stymie easily transforms into a kind of dullard's scribbling if handled indelicately, so, despite the brevity of the text, I spent a couple of months proofing, editing, shifting, mitering, and mortising before going to press. 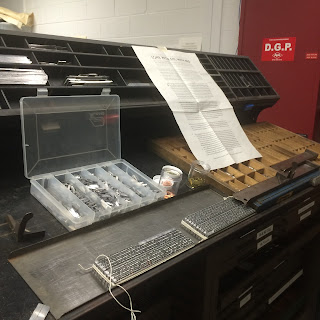 Below is a close up showing characters to be replaced with mortised pairs (circled) and word spacing to be adjusted. (The text correction was thrown out in place of a different solution.) 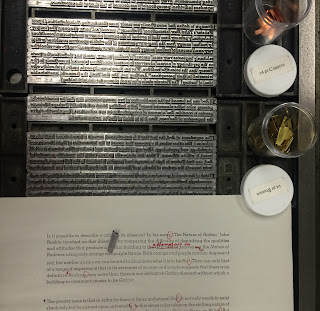 Each new section begins with a pilcrow, each of which is elevated one point for better alignment with the Stymie. 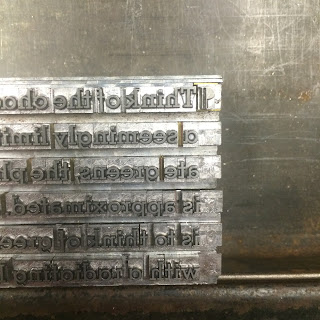 The text and images are printed on Zerkall Litho 270gm, a paper whose surface undergoes a remarkable transformation after it is dampened and dried, becoming much less smooth and more accepting of ink. Below left is a stack drying between blotters, while on right a stack is being dampened. 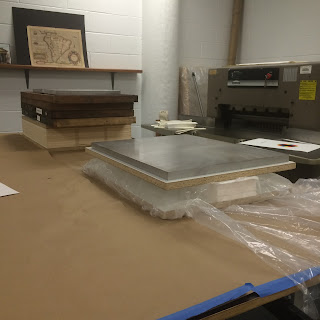 Once ready to print I assemble an imposition dummy of the book containing all pertinent information for printing. Each sheet is marked with the signature in which it appears (A=Signature 1; B=Signature 2, etc), its placement within that signature (A1, A2, etc), its page number (the circled numbers), whether it is printed on the felt or screen side of the sheet (F or S), what text or image gets printed on which page ("Websters", "Red", "Two Source Text", etc), which press it will be printed on (the Vandercook Universal III or the FAG Control 405), and then slashed through and dated when it is printed. 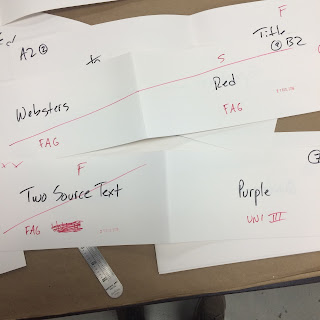 Both the FAG Control 405 and Vandercook Universal III are hand operated flatbed cylinder presses. I print metal type on my FAG. 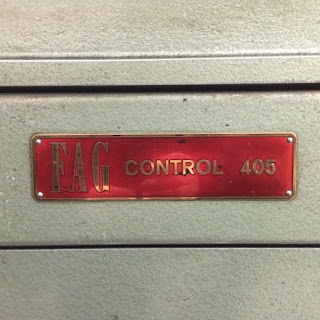 And I print blocks and plates on my Vandercook. 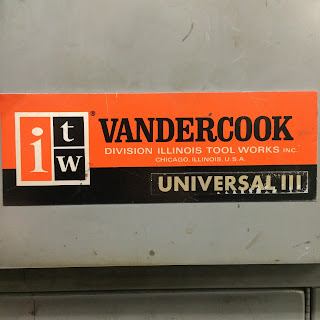 Once the imposition dummy is made, the paper dampened and dried, the text re-read and proofed one last time, I begin printing. The first task of the first press run is to establish the "black master," the ideal example of what I want every page of type to look like. Throughout the printing of a book this master is often fiercely interrogated and questioned—one day it looks perfect, the next it looks terrible—, but despite the daily vagaries of vision, the master stays out on the table until the book is done. 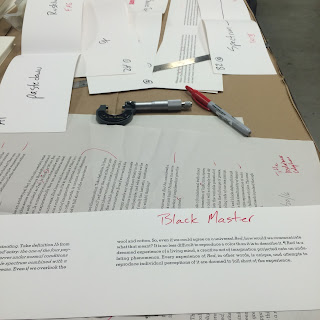 A similar process of color control is undertaken with color prints, but there is a little more latitude because there is no instance in which a color is repeated in the book. I still work very hard to keep color consistency throughout a press run—I want all of my orange pages to look like the same orange, for instance—but with large areas of color I usually choose a selection of slightly varying prints as my "acceptable range" rather than having one single master. This is particularly important with large solid areas because the color of the ink changes dramatically as it dries. If a press run lasts four hours, your initial master will have changed color simply because the ink has dried during the process of the run, and freshly printed sheets that might be the same color as your master will look different until a similar amount of time has elapsed. Which brings me to why I wrote the book in the first place.