After a week of concentrated work in the country (with a day of socializing over the weekend) Interstices & Intersections is coming into focus. At the beginning of a book my work process consists mainly of thought. I develop text and image ideas for months or sometimes years without committing much of anything to paper. I make some doodles on scrap paper, write bits of text that are always overblown – short misguided sketches that test tone and color but never make it into the book. It's a surprisingly fruitful period in retrospect but at the time it feels like I am adrift in a vastness that I cannot and will not comprehend. As ideas solidify and connections become apparent I get increasingly anxious to do some physical work but the act of putting something down on paper is preceded by an extended period of procrastination. I know that once I begin I cannot stop, so I put off the beginning as long as possible. To sate my desires I spend a week or two proofing preliminary sketches but the proofs only magnify how much there is left to do. With no more to proof, I return to my thoughts and to dealing with the "real world" until one day I can't take it anymore and I begin to write and draw. (Just for fun, this whole process is repeated in the build up to printing.)

So here I am, alone in the country with my ideas, pens, books, and computer. Each day is a performance in miniature of the whole process: I get out of bed, have coffee, am inspired to begin but spend an inordinate amount of time thinking, preparing, pacing. The process of "coming into focus" is a one-pixel-at-a-time event and it can be excruciating. But it's also a lot of fun. To get to where I need to go I often spend the day drawing something that I have always wanted to draw but that won't make it into the book. This drawing is inspired by a pavement I saw in Sienna fifteen years ago that has tormented me ever since. 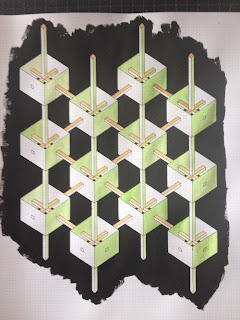 I originally drew this with the intent that it would fill the central panel of one of the illustrations for Proposition viii.15. Three states of the illustration are pictured below, the third showing five of the projected eleven colors involved in the print. 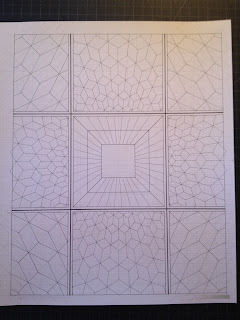 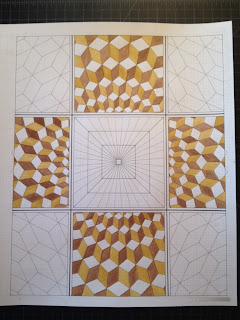 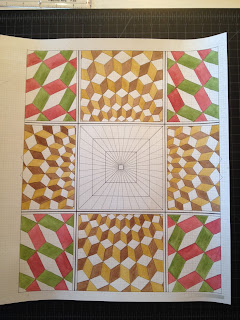 Posted by Russell Maret at 8:27 PM

Now on to the nitty gritty. I have chosen eleven of the thirteen propositions for Interstices & Intersections and have removed myself upstate to work in seclusion on fleshing them out. This is the kind of work I love best, floating about within a day that is roughly delineated by the hours of 10 am and 4:30 pm. During this time I read, draw, pace, investigate, cook (five hot dogs today alone), nap, parse, pursue, peruse, and ponder. Little tangents flare up and often fizzle out. The route that I plan for the day never quite works and, when quitting time arrives, I feel like I've made enormous progress but have little or nothing to show for it. At the end of a week of this, my little pile of nothings adds up to a thing or things, and the partially formed book in my head is one step closer to breathing the air.

It is dark now in Millbrook but it was a glorious day. I kept meaning to get out beyond the grill to inspect the flowers. Maybe tomorrow. 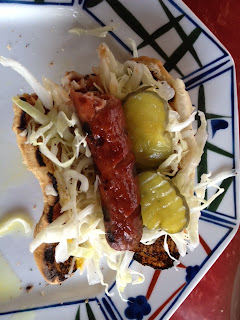 The "Compost Dog," a Nathan's hot dog grilled at high heat, served with mustard, ketchup, slaw, and pickle chips on a toasted bun.

Posted by Russell Maret at 9:45 PM