It has been a busy month in the shop. After our brief summer break, I had Nancy re-soak the Gustave Flaubert page to flatten it out after air drying at the Center for Book Arts. This second soaking of the paper transformed its surface to such an extent that the original, undampened paper feels like a clay coated sheet by comparison. The twice dampened sheet has the texture and softness of Belgian linen while still retaining the "snap" of a fine handmade paper. The moment I touched it I realized that we would have to put every sheet through the dampening process twice—3,000 sheets of paper each hand dipped in filtered water, blotted, and hung to dry. Twice. We now have two people working full time on this process.
Shortly after the Flaubert re-dampening, Micah Currier brought by the first castings of my Lisbon ornaments. Inspired by, but not based on, the calligraphy of Joaquim Jozé Ventura da Silva, the Lisbon ornaments are meant to work in combination to form diaper patterns. Although Ventura da Silva did work in Lisbon, I chose the name for the ornaments because of the patterned paving stones throughout Lisbon, pavings that work similarly to the ornaments. One set of the ornaments will be used to print the patterned papers for the covers of the standard edition of Specimens. The other set were used on the J L Carr page of the display settings. After publication, the Dale Guild will release a limited casting of the ornaments for sale.
While I began preparing the final files for the text settings of Specimens, we took two weeks to print a small book of 23 short prose pieces by Mark Strand in my new Strand Serif typeface. Nocturnes will ship to Book Lab II in a week or so for binding & a prospectus will be available soon. Five pieces from the same series will appear as one of the text settings in Specimens.
Back on Specimens, I've now printed three of the five text settings: The Planning of Temples by Vitruvius; On the Profligacy of Marcus Antonius by Cicero; and On the Usefulness and Invention of Writing by Joaquim Jozé Ventura da Silva. I will finish up the remaining two this coming week.
Finally, thinking that one new foundry type might not be enough, I decided to make a second one. My typeface Nicolas, which was drawn while thinking of the enamel-work lettering of Nicolas of Verdun, has now been cut, fit, and trial cast by Micah Currier. The type will be used for the William Morris page in the display settings as well as most of the titling in the book. Like the Lisbon ornaments, the Dale Guild will be releasing a limited casting of Nicolas for sale at the Oxford Book Fair. 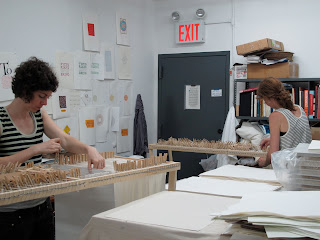 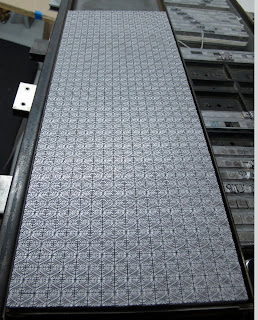 Two of the Lisbon ornaments cut and cast by Micah Currier at the Dale Guild Type Foundry set up to print the cover paper of the standard copies of Specimens. 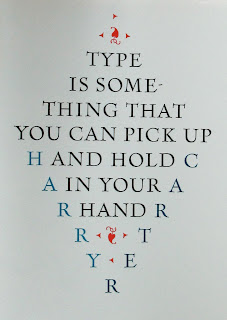 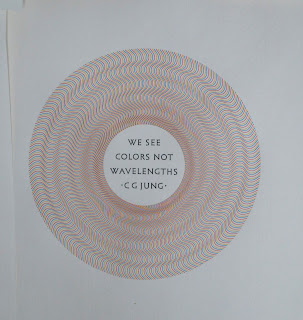 Baker used for the Jung page. 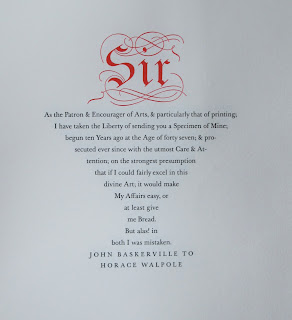 Two more of the Lisbon ornaments used with Texto Portuguez for the J L Carr page. 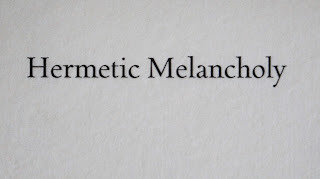 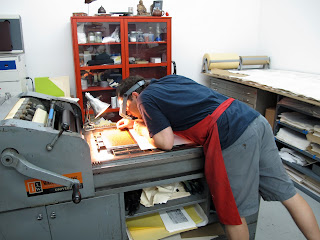 Doctoring a plate from the text setting of Cancellaresca Milanese Formata. 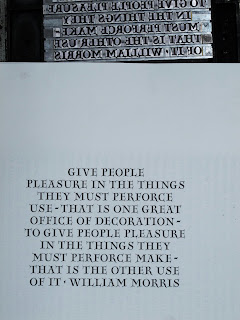 The first setting of foundry Nicolas cut and cast by Micah Currier at the Dale Guild Type Foundry.
Posted by Russell Maret at 1:22 PM