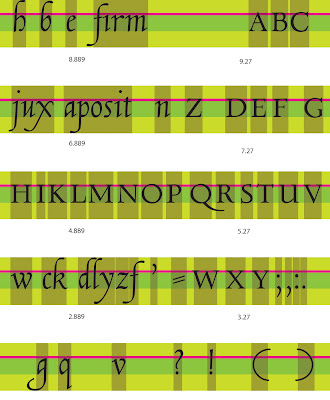 In an effort to create a more faithful rendition of Castiglioni's italic I am designing the type so that each letter has a pre-determined set width, just as it would have been designed in metal. By minimizing the number of kerning pairs the hope is to maintain the underlying rhythm of the original. The most typical – and legitimate – complaint about digital typography is that it is possessed of a blasé uniformity, an uninspiring sameness of color, angle, kerning, and alignment. Conversely, most efforts at scribal or (dreadful) hand-written typographic forms present a mere parody of rhythm, usually at the cost of legibility, grace, and flow. With this in mind, the Cancelleresca Milanese type is a study in the middle ground, an attempt to be simultaneously mindful of typographic necessity and calligraphic improvisation. ¶And then the problems begin. I am now on the third drafting of the type. When I proofed the first draft I was struck with fear at what I saw: more Roycrofter than Renaissance, more Goudy than good. Part of the difficulty arises from the fact that the first cutting of the original – the 1541 version that I am using as my model – is actually only a lowercase font that was paired with a pre-existing set of capitals. The capitals, in turn, are German rather than Italian humanist forms. It is fascinating that the printer chose to set a book about trans-and cisalpine inscriptions using a combination of trans- and cisalpine types. Fascinating and frustrating. The first casualty was the R, a letter that stands out as being so unique in the original, a relative of the early Humanist capitals of Donatello [see below]. It was one of the letters that first drew me to the face, but when I printed it I couldn't stop thinking of the New Yorker font or – I was crushed – a Roycrofter book. I can't abide that. Then the q presented a problem. The original used by Castiglioni was an upside down b with the tail, as was the fashion at the time, trailing down & to the left. To our eyes this is an impedement to the easy progression of the narrative, more of an affectation than anything else, and so it must go. As it stands now I am happy with the font but I also understand that it is an interpretation, a digital cousin of the original type.