Over the course of a couple of years, Tim Barrett and I have engaged in a conversation about the role of gelatin sizing in papermaking and printing. The central issue we discussed was this: sizing has a negative impact on print quality but a beneficial impact on the endurance and aesthetics of handmade paper. Tim’s research into pre-Industrial European papermaking processes has suggested that some, and perhaps many, post-15th century books were printed on waterleaf (unsized) paper to which the books’ printers, or someone else, added sizing after printing. For those of us who use expensive handmade paper to make even more expensive books, the thought of dipping our printed sheets into a vat of liquid gelatin is fraught with morbid possibilities. Despite this, after our initial conversation I sent Tim some sheets printed on waterleaf paper so that he could re-size them. The results were intriguing but not entirely persuasive. Although the increased durability that sizing can lend to paper is appealing, the books that I make are used in ways that are not comparable with those in which a 16th century book was used. A contemporary press book that is printed on soft, unsized cotton paper, housed in a box, and stored inside a temperature-controlled library will bear its age well. If the same paper had been used to print pocketbooks for traveling Humanists, the books would not have withstood the demands of their owners.

The repeated physical use to which many early printed books were subjected lent them a patina similar to that of well-used tools, full of shine and scuff. In addition to the frequency of opening or the method of storing their books, early modern bibliophiles differentiated themselves in one important way from their 21st century avatars: they wrote in their books. They wrote in the margins, between the lines, in the voids of woodcuts, on fly leaves and paste downs. They parsed, debated, excised, and amended their texts in ways that are unthinkable to contemporary private press printers, but that were certainly expected by the printers of the day. If the paper in their books had not been sized, the ink of their pens would have bled into the paper fibers rather than holding a crisp line. The expectation of marginalia was another determining factor in the sizing of book paper after printing. Just as it is today, use was the arbiter of process.

One might reasonably ask then: If my books do not require the durable benefits of gelatin sizing, why would I deal with sizing at all, particularly with the risky proposition of adding sizing to printed sheets? But ultimately my interests in paper sizing are not utilitarian, they are aesthetic. My favorite sheets of handmade paper are crisp, like freshly ironed linen, and turning them in a book is a complex sensory experience. The papers quiver with a gentle rattle as they are turned, making it hard to resist drumming one’s fingertips against them. When bent they make a snapping sound, when shuffled they whisper like rustling leaves. These qualities are the accidental aesthetic benefits of gelatin sizing, and they are the qualities that I most want to have in the papers that I use for my books.

With many of these issues in mind, Tim Barrett and his students at the University of Iowa Center for the Book have been trying to recreate the working conditions of a pre-Industrial papermill, employing a three person team to make 100-200 sheets of handmade paper per hour. The paper they are making is not meant to be perfect or precious but well-made and serviceable, to invite contact and annotation. With this paper, Tim and his colleagues are attempting an intriguing sleight of hand, engaging an historical process in the hope that it will arbitrate contemporary use. The problem, of course, is that once a craftsperson puts something out into the world, he/she cannot control how that object is used. It’s all well and good to want people to use paper in a certain way, it’s another matter altogether to get them to actually do it. Handmade paper, however quickly made, instills a certain amount of fear in bibliophiles, and the speed with which it is made does not alter a paper’s perceived preciousness.

In thinking about how to get people to use Tim’s paper more aggressively, it occurred to me that I would have to make a book whose content would tilt the scales; a book whose text would encourage people to remove it from the shelf and bring it into the messy world of their daily lives. No book satisfied this requirement better than a cookbook. In the hope of finding people who would be willing to put a fine book through the paces, I invited a group of printers, binders, and librarians to submit one or two recipes each for a small cookbook called Hungry Bibliophiles. In turn, each participant agreed to cook as many of the recipes as they can within the space of a year, to cook them with the book open on their countertop, and to take notes in ink on the pages. The book would be printed on waterleaf paper that would be gelatin sized after printing, and bound in a historically inspired paper binding designed by Maria Fredericks. 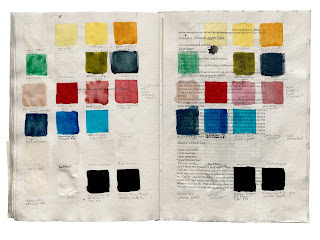 Every aspect of Hungry Bibliophiles was conceived in the spirit of Tim’s work in the papermill, primarily his experiments with speed. Tim, Maria, and I each respond viscerally to the imperfections that are the byproducts of pre-Industrial speed—those of a practiced hand working quickly, as opposed to a machine working efficiently—and Hungry Bibliophiles gave us a chance to explore them in practice. Following Tim’s lead, I designed a revival of a seventeenth century Dutch typeface for the text in two days. I allowed myself one drawing and one revision per letterform, aligned the letters by eye, and set each on a fixed width, in the hope of tapping in to the spirited irregularity of my model typeface. I then printed the book in twelve days, shipped any finished sheets to Tim for sizing at the end of each week, and drove the final batch out to Iowa City so that I could participate in the sizing and transport the sized sheets back to New York for binding. 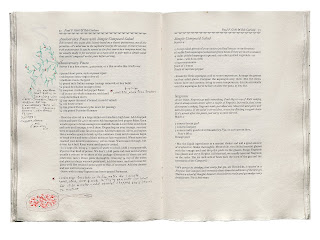 In keeping with the speed experiment, Maria Fredericks set a goal of binding all seventy-five books in the edition in two days. To accomplish this we assembled a crew of eight variously experienced binders and set aside a weekend for our experiment. (The crew consisted of Maria Fredericks, Anne Hillam, Vasaré Rastonis, Yukari Hayashida, Annie Schlechter, Nancy Loeber, Gaylord Schanilec, and me.) Maria designed a long stitch paper binding structure made entirely from UICB papers, and lead the production; Annie made sandwiches to fuel the workers; and by Sunday afternoon the eight of us had bound seventy-nine copies of the book. The books were distributed to the participants for cooking and annotating, and now the used books have been photographed by 42-Line to make this facsimile.Copies are available for purchase at russellmaret.com. 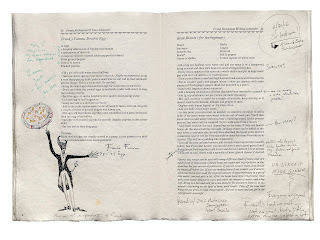 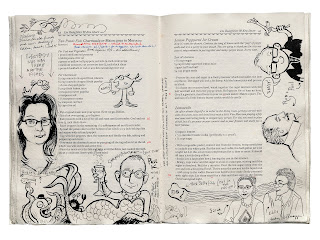 Letterforms are contingent on the technology by which they are created. Lettering technologies sort themselves into four basic categories—calligraphic, epigraphic, typographic, and digigraphic—and can be simplified for our purposes thus: letterforms that are drawn directly onto a surface using a hand-held tool are calligraphic; those that are incised directly into a surface, epigraphic; those that are cast from a matrix, or mechanically engraved, onto a body of fixed height and depth but flexible width, typographic; and those that are digitally outlined around pixelated clusters, digigraphic. Identifying a letterform’s generative technology gives us insight into the fact that although one variety of letterform may be made to look like another variety, it cannot be made to act like another without, at best, suffering significant loss. For instance, the printed form of a typographic letter may look calligraphic, but typography itself cannot accurately replicate the action of calligraphy. In incunable periods of new technologies, these distinctions take on a deeper relevance as the nascent technology attempts to differentiate itself from other available technologies. This is the period we find ourselves in today with digital letter design.

Lettering technologies embody incumbent practical and aesthetic presumptions that appear universal when they are in fact technologically specific. The gravitational pull of these presumptions long outlasts the transition from one technology to another. An obvious example is the Industrial Age proposition that a single typeface, or a grouping of closely sympathetic designs, is sufficient for the conveyance of complex textual information. In the pre-typographic era it was taken for granted that different kinds of information would be presented in different lettering styles. Early typography imitated this variety in the convention of setting ecclesiastical texts in black letter and secular ones in roman types, in the use of structurally diverse typefaces (often determined by no other means than availability), and in the generational re-interpretation of historical styles. This variety quickly became impractical within the framework of Industrial typographic technology, giving rise to aesthetic presumptions that validated the technology. Such presumptions may have made sense within the framework of their native technologies, but the technological limitations from which they arose no longer exist.

These ideas will be explored in my forthcoming book,
Character Traits. Follow the book’s progress here.
Posted by Russell Maret at 10:33 AM