Announcing a new book: Linear A to Linear Z

Last autumn I found myself daydreaming about lines. This was not terribly surprising—I had spent the previous few years concentrating on color to the near exclusion of line—but it felt unusual in that it was such a sharp break in my thinking. There was no color involved in my fantasies, all of my dreamed lines were black and white. Specifically I was thinking about letterforms composed of intersecting horizontal and vertical lines, and in my off hours I made some digitally drawn experiments: a bifolium for the Codex Foundation's publication, Alchimie du Verbe, and my MMXV new year's card. The results were satisfying, particularly the Alchimie du Verbe print, but they did not quite capture what I had in mind. The lines that I wanted were neither digital nor were they black. Instead, I kept imagining white lines hand cut from a black surface, and a printed book of the blocks titled Linear A to Z. I chose 4 x 6 inch linoleum blocks as the ideal proportion and medium, and I began making thumbnail sketches, always stalling at certain key letters that seemed to resist the linearity, or the proportion, or both. 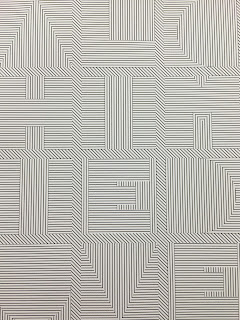 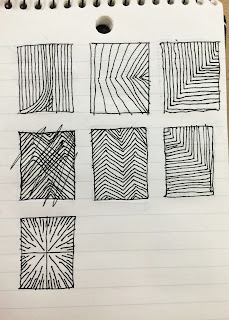 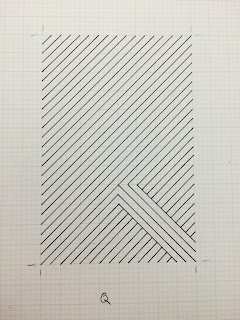 Full scale sketch of linear Q from Linear A to Linear Z. 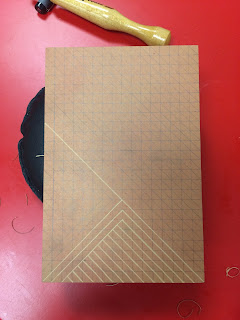 The Q block in process.

A few months later I began sketching the letterforms at actual size, working through the alphabet fairly quickly with the exception of those same obstinate letters. During the process I found myself wanting to use an awl to make circular dot marks in a block. My mind revolted against the thought. No, no, you can't do that! This is an alphabet of lines! This resistance to intuition after a system has been developed is the most challenging hurdle in designing an alphabet, particularly when the alphabet is based so clearly on geometric forms. In every geometric alphabet I have drawn there has been a similar moment of reckoning, a crescendo of head-banging-against-wall until the wall finally breaks, and the rigid geometric system is either loosened or abandoned all together. Despite their gathering into a seemingly homogeneous alphabetical group, letterforms are diverse. They have individual histories, potentials, and, on a basic level, they have different parts: horizontals/verticals, diagonals, and curves. Different letters need to be approached differently.

As if to prove the point, the first block I cut of my linear alphabet was an O composed of hundreds of tiny round dots, with nary a line in sight. Eventually I settled on three kinds of marks that gave me enough flexibility to produce the twenty-six letterforms: the line; the dot; and the wedge (a cuneiform-like mark made by driving a V-shaped cutting tool deeper into the block). For some letters these marks are used in ways that might be expected—the dot for the O, the line for the L, etc. For others they are not. In any case, the use of these different marks required a re-visiting of the title. Linear A to Z implied that all of the letters were composed of lines, which was no longer true. Linear A to Linear Z, on the other hand, described the marks used to make the A and Z while leaving room for the intermediary letters to be constructed by other means. 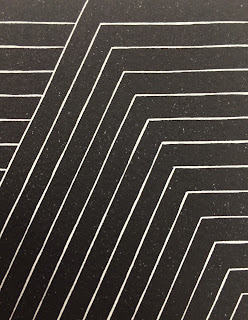 Detail of lines used on the A block. 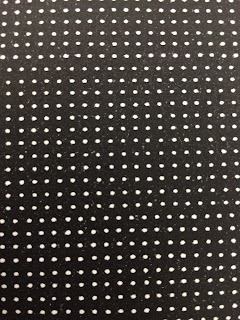 Detail of dot marks used on the F block. 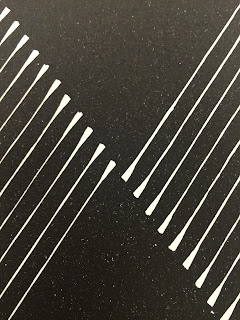 Detail of wedge marks used on the X block.

Linear A is the earliest known Aegean script, discovered by Sir Arthur Evans while excavating in Crete in 1900. Used by the Minoans in the early second millenium BCE, Linear A shares many characters in common with the later Linear B script of the Mycenaeans but, unlike Linear B, Linear A remains undeciphered. As the Mycenaeans succeeded the Minoans as the region's dominant culture, it is not too great a stretch to search for a link between the two scripts, but attempts to apply character values from Linear B to the same characters in Linear A results in gibberish. That a familiar form can have multiple meanings, or be legible in one instance and inaccessible in another, strikes me as an illuminating insight into the struggle of mark making in general, and letter design in particular. It is also a model for the letterforms I designed for the book, which are not intended to be immediately recognizable as the A, B, Cs we commonly use, but as forms and shapes that evoke the twenty-six Roman capitals. They are meant to be A, B, Cs that can also be something else entirely.
Posted by Russell Maret at 10:31 AM