After a bit of a rocky start setting up, life in the studio is now moving at a steady pace. The day begins with a 7.5 mile bike ride downtown, over the Williamsburg Bridge, and on to the studio on Flushing Avenue, where I print for seven or eight hours, and then turn around and bike back home. As it stands now, my intention is to print for one month stretches, followed by a week of drawing and writing at home in preparation for the next month of printing. These breaks in the schedule are critical. By the end of the month, the print work begins to feel more like drudgery than creativity, and the prospect of being at my drawing table at home fills me with nostalgia. Once home, I throw myself into the chaos of tracing paper, tape, pencils, and pens that my table quickly becomes until, after a week or so, I get antsy to proof what I have done, to see if the colors of my separations work together on paper the way they do in mind (they rarely do). Even though I paint and draw more than I used to do, I still do not consider an image complete until it is printed. This casts my drawings in an interesting light—until they are printed my drawings are purely hypothetical, they are propositions for prints that often do not work in practice. When they do work, the process begins again and all I can do is print, print, print.

Unlike my drawing table, my print shop is kept in rigorous order for the duration of the project (though the order tends to slip noticeably in the final stretch). The book is composed of thirteen propositions, each of which carries over two spreads. Each spread is alotted one hundred sheets of Zerkall Litho 250gm paper for the standard edition; the requisite number of sheets for two complete sets of state and progressive proofs; and twenty to twenty-six sheets (depending on the spread's complexity) of Twinrocker Handmade Paper's cotton & abaca paper for the deluxe. Each proposition has a shelf, each spread a side of that shelf, and on and on it goes.

My approach to the book is to print the images first and the text last. I always prefer to print the most difficult thing first, in case of error there is less to reprint. I also want to give the text the most time to rest and germinate before committing it to paper. In the end, I am more confident in my ability to draw a triangle than I am in my ability to describe what that triangle means to me. All of the spreads pictured below are therefore lacking a critical element: the words. Without the words, many of the spreads can seem disjointed and out of place among one another. The images on them are just images and the key to their understanding is contained in the text. That text, in turn, is composed of thirteen shorter texts which are themselves each related to a book of Euclid's The Elements. So when looking at the photos below, try to imagine text where all of the large white spaces are. Some of it is shaped in unexpected ways, some in the way you might expect. 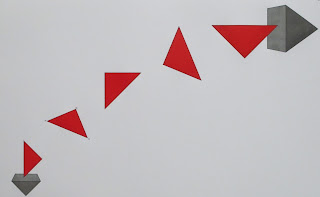 This is the opening spread of the book, for proposition i.19. Although it looks simple, the image required eighteen cranks of the press to achieve the thickly layered colors (the red is actually four coats of ink, two of solid red with two scumbles of yellow on top). 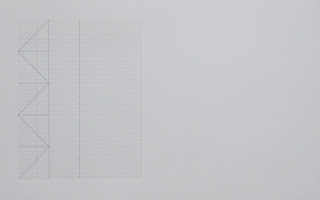 This comparatively pale image follows it, a five color rendition of a sheet of loose leaf paper showing the folding diagram for a paper football. 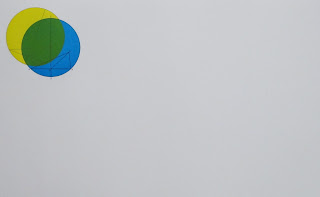 The opening spread for proposition iii.1 so far has six impressions (both the blue and yellow are double hit). 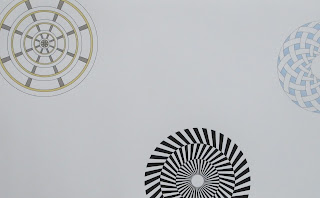 The second spread for iii.1 with six of the ten plates that will eventually be required. Many of the subtleties are lost in the digital reproduction but the blue ink on the basketweave is a particularly satisfying periwinkle color made from hand ground ultramarine deep and cobalt blue pigments. 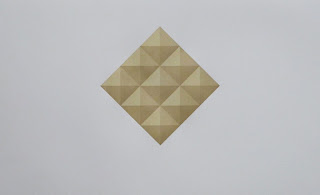 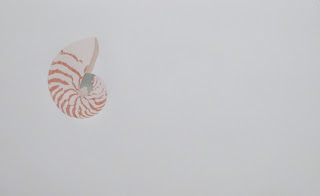 The second spread for proposition vi.30 with eight of the ten or eleven plates that will eventually be used. 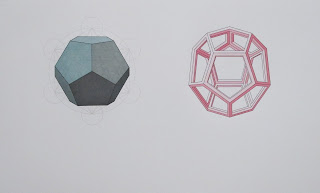 The final spread of the book, two renderings of the dodecahedron for proposition xiii.17, comprising thirteen plates.
Posted by Russell Maret at 10:25 AM