Last summer I visited Phil Abel and Nick Gill at Hand & Eye Letterpress in London. After lunch, Nick and I got to talking about the feasibility of making a new typeface for Monotype composition casting. Nick had been studying the finer points of typefounding at the Type Archive in south London and he had been unable to locate one specific piece of information that would make a new composition face possible: he could not find detailed instructions for the creation of patterns for the pantographic punchcutting machine used by Monotype. Unlike direct matrix engraving processes in which a letter’s fit and alignment can be determined after the engraving, the Monotype process requires each letter’s fit and alignment to be figured out in advance. Those calculations are manifest in the pattern used to engrave punches, and they are followed through to the punch, the matrix, and the final piece of type. If the letterform is not in the right place on the pattern, in other words, it will never be in the right place on the piece of type. The trick is in figuring out the specific relationship between the pattern and the resulting piece of type, and the literature on this relationship is lacking. Intrigued, I lightheartedly suggested that we try to figure it out—Why not?—and Nick and I agreed that he would discuss it with Duncan Avery at the Type Archive and get back to me.


A few months later I was back in London for a meeting at the Type Archive. In the time that had passed since our discussion at Hand & Eye, Nick had assembled an impressive, multi-generational group of collaborators to assess the feasibility of the project and, hopefully, to figure out the missing pattern information. The assembled group included Duncan Avery, who worked for Monotype from 1945 until 1992, at which point he initiated the Type Museum; Graham Sheppard, whose tenure at Monotype spanned 1952–1995 and included work in the Type Drawing and Type Development Groups; Parminder Kumar Rajput, who began at Monotype in 1965 and is now the only person qualified to operate every machine used in the production of matrices; Doug Ellis, who began as an apprentice at Monotype in 1955 before eventually becoming foreman of the Monotype Toolroom in 1991; Thomas Mayo, a printer who has been making a name for himself through his innovative use of laser cutting, the technology he will use to cut the patterns for our type; and finally Nick himself, a printer and typefounder who is the only person other than Kumar Rajput qualified to cut punches and make matrices for Monotype Composition Casters.


After a brief tour of the Type Archive’s facility, we found ourselves in front of the punchcutting machine where Nick and I were hoping to begin the long, arduous process of discovering the missing pattern measurements. Kumar pointed out the various parts and functions of the punchcutter for my benefit and then Nick posed the thousand dollar question: How do we figure out the relationship between the pattern and the piece of type? It is difficult in retrospect to capture the comedy of the ensuing exchange, but imagine our surprise when, rather than getting a long bibliography of hints and sources, Graham Sheppard chimed in from behind us with a list of precise measurements from the top of his head.  Sometimes all you need to do is ask the right person the right question. In an instant the focal point of the day changed from figuring out how to make a single piece of type to endeavoring to make a complete typeface, Hungry Dutch. 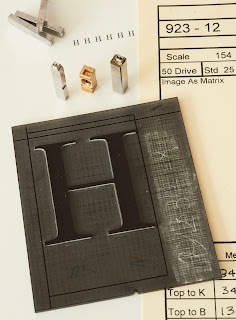 Since that meeting in October there have been many fits and starts. Discussing the abstract idea of type manufacture over lunch is quite different from actually manufacturing type, and my learning curve has been long and steep. But nearly six months to the day after our meeting at the Type Archive, Duncan Avery sent me a packet containing newly made type, matrix, punch, and pattern, all derived from my drawing of a letter H. The thrill of opening that packet is one that has no equivalent in my experience—in my hand was evidence of something I had assumed was utterly impossible.


The thought that we might be able to manufacture new composition typefaces is almost too exciting to bear but the excitement is tempered by the enormity of the undertaking. At the current working schedule of the Type Archive, it is estimated that making Hungry Dutch would require nearly two years. It is not, in all honesty, a project that is likely to be completed. But completion is not always the most rewarding outcome of creative work. Instead, the process of making the new type is the aspect of the project that promises to bear the most enduring fruit. We are at a jump or fall moment in the history of this technology. The four men involved in the manufacture of the Hungry Dutch matrices—Duncan, Graham, Kumar, and Doug—are the brain trust of the Monotype Corporation. The only way to fully access the knowledge that they have acquired is by going through the process of manufacture with them. The only way we can preserve that knowledge is by documenting everything we can along the way.


I propose to make this a communal endeavor. I will work with the Type Archive to go as far as we can, and to collect as much information as we can. I will print fun ephemera as we progress and, eventually, a book about the process. The first step it to make the thirteen “medial trial letters”—a, C, e, f, g, H, h, i, n, O, o, p, t—and proceed from there. What I am looking for are supporters who are willing to sponsor the making of a letter or two (or more), at a cost of $600 each. In exchange for your support you will receive a pattern, matrix, and piece of type for each letter you sponsor*; copies of all ephemera printed from the type; and a discount on the resulting book that I publish, in which you will be listed as a patron. This project is conceived as a typographic adventure, and, in the spirit of all real adventures, it is undertaken without a clear idea of what will result. All that is required is people who are willing to come along for the ride. If you would like to sponsor a letter, please email, call, or visit the “Books in Print” section of my website and click on HungryDutch.

*An important part of this project is that we follow Monotype's in-house procedures as closely as possible. Those procedures necessitate the manufacture of what are called the thirteen "medial trial letters" before moving on to the full face. From these letters—a, C, e, f, g, H, h, i, n, O, o, p, t—the head of drawings, Graham Sheppard, and the head of punch cutting, Kumar Rajput, are able to glean the necessary information for production of the remaining letters. In the spirit of this project, I am reticent to promise sponsors that they will receive letters other than the initial thirteen. However, due to the response thus far it does seem certain that we will be able to go beyond them. So this is what I propose: choose your letter or letters from the thirteen medial letters: a, C, e, f, g, H, h, i, n, O, o, p, t. If you would prefer different letters, let me know and, if we get as far as making them, they will happily be yours.
Posted by Russell Maret at 11:10 AM