Mixed 29 September 2010
First test 29 September 2010
Recipe:
30ml Ink 001 + 1ml Grove's 16th century amber varnish*
Preliminaries:
I received my 80ml bottle of "16th century amber varnish" from Grove's last week. Although I know the ink I mix with it today will be unusable, I am curious to see the effect of the amber on the ink by doing side by side draw downs with Ink 001 and Ink 002. Grove recommends one drop for a spatula knife full of oil paint. I have know idea what that would translate to in ink. I am starting with 1:30 amber to ink because a 1/4 teaspoon is 1ml and two tablespoons is 30ml (two tablespoons will yield enough ink for my experiments).
Working characteristics:
On working the ink with the brayer it had the same sloppy, splattering consistency of Ink 001. However, on clean up there was noticeably more resistance to the California Special Wash I use. I imagine I'll need to switch to Kerosene for wash up.
Drying:
The draw downs are dry after only a few hours (with the exception of thicker swells).
Odor:
The amber varnish has a good deal of turpentine in it. I guess you come to love what you know: although I can practically bathe in denatured alcohol I have always found the smell of turpentine revolting. I suppose I'll have to come to know turpentine, and love it.
_______________
* I had considered naming this ink "Ink 001a" because it is simply Ink 001 with an additive. I opted for the name "Ink 002" because all of my ink experiments will be variations on only two or three additives. I would prefer that my final ink be named "Ink 025" or "Ink 026" rather than "Ink 001y" or "Ink 001z."
Posted by Russell Maret at 10:10 AM 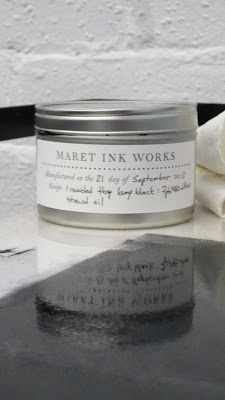 Ink 001
Mixed 21 September 2010
First test 22 September 2010
Recipe:
Total of 1/2 cup of ink made with 1 rounded tablespoon of lamp black and 450 dPas linseed stand oil. So far, Hebert's Encyclopædia is the only mention I've found of the proportion of pigment to oil. his recipe calls for one part pigment to seven parts oil by weight. I mistakenly mixed 1:7 by volume which will result in a highly diluted pigmentation.
Drying:
Made one draw down at 9:30 am on 21 September. Within 24 hours the ink was dry to the touch with the exception of a few thicker swells.
Before printing:
Many of the 19th century articles on ink manufacture mention the practice of adding prussian blue pigment to black ink to compensate for poor quality black pigment. This practice continues today. Nearly every commercial black ink I have used has a high blue content, making a true matte black impossible to achieve. What I am striving for with my ink is to make a black that reflects as little light as possible, turning each letter into a miniscule black hole around which the white paper shimmers. My first draw down of Ink 001 is a promising step toward my goal. The ink has a lovely matte finish and no noticeable trace of blue.
Working characteristics:
As I had suspected the ink is too fluid—it even splatters a bit when worked with a brayer. I hate to think what would happen if I put it on my press. The consistency and tack is closer to an intaglio than a relief ink. The linseed oil simply isn't thick enough. On Brian Donnell's website I found my first specific numbers for boiling linseed oil. According to Donnell, the linseed oil needs to be brought to 720-750°F before it makes an acceptable ink. That is a considerably higher temperature than stand oil is boiled to. There is no point in continuing until I boil some oil upstate.
Posted by Russell Maret at 9:19 AM

20 September, Progress on amber
Since my initial visit to Kremer Pigments, I have felt increasingly uncomfortable with the idea that, on the advice of two of their employees, I was going to put turpentine and amber in a pot and cook it on my kitchen stove. In my twenties I spent a few years working in art supply stores and, if I may be considered a representative cross-section, there is about a 90% chance that the advice I received at Kremer was wrong. So last night I spent a few hours reading and have had some of my concerns addressed. It turns out that the clerks I consulted at Kremer were misreading Kurt Wehlte's entry, Amber, a Hard Resin, in The Materials and Techniques of Painting:
Some amber is exceedingly hard, softening at approximately 250°C and melting between 290 and 300°C. This fossil resin cannot be dissolved directly, even in hot drying oils, but must be fused or "run" first.... Attempts to dissolve amber directly in turpentine succeeded on a small scale in the laboratory, thanks to some ingenious tricks, but these were without practical value.
The phrase that stuck out as most troubling (besides the extremely high temperatures and "without practical value") was "must be fused or 'run' first." There is no mention of melting in turpentine at heat or of the conditions required for fusing the amber. Additionally, I have no ingenious laboratory tricks up my sleeve. After a few internet searches I found a couple of helpful references on violin making and woodworking blogs. This entry posted in May 2007 by someone calling themselves Fridolin is particularly insightful:
I have recently started making my own amber varnish. I have found the descriptions given in Geary Baese's book on the old italian varnishes to work for me. The difficult part is to fuse the amber, which requires A LOT of heat. In my experience 300°C is not enough. I use special lab equipment (glassware and electric heat source). You also get a lot of toxic and smelly fumes (It can not be done inside). Once you have fused the amber, it easily dissolves in linseed oil (at a much lower temperature) and it gives a very thick varnish that dries within 24h in my UV cabinet.
In the 18th century, when amber varnish was more widely used, it must have been obvious that the amber needed to be fused before adding it to the oil. In fact, Fridolin's choice of words, "Once you have fused the amber, it easily dissolves in linseed oil," matches Hansard's Baskerville recipe exactly. Clearly, my little jam jar of linseed oil and amber will never transform into Baskerville's magic ink of its own accord. Quickly, I began searching for Mr. Geary Baese's magnum opus on old Italian varnishes. Google books has scanned one copy but does not have the rights to make it available. They list Baese as the publisher and that the copy they scanned is at the University of Michigan. Searches on bookfinder, abebooks, and Columbia University's online catalogue yielded no copies. Searching for information on Baese I found this foreboding entry from 1995 on the website of Alf Studios Concert Violins:
The pure resin varnishes he uses cost more than $10 an ounce from Geary L. Baese, 610 W. Mountain Ave., Fort Collins, CO 80521, but don't bother contacting Geary unless you are a committed violin maker.
Not only am I not a committed violin maker but.... Google searches yielded no further information on Baese. ¶My next search for amber fusing techniques brought William Theodore Brannt's, Varnishes, lacquers, printing inks, and sealing-waxes: their raw materials and their manufacture, (1893) to my attention. After reading this passage on page 45, I began to have some serious second thoughts:
In fusing it [amber] suffers decomposition. It gives off water, succinic acid, marsh gas, and a mixture of liquid hydrocarbons (known as oil of amber), while a more or less dark-colored substance, the so-called amber-colophony or fused amber, remains behind. This amber-colophony is the substance which is especially prepared for the manufacture of lacquers by roasting amber.... The oil of amber, which in fusing amber may be obtained as a by-product, forms in a refined state a pale-brown fluid of a strong, disagreeable odor. The crude oil is dark brown, and possesses a very repugnant odor.
After reading this enticing description, I began searching for where to buy already fused amber rather than searching for how to fuse amber. The first hit was a 10ml (2/3 tablespoon) vial available from Dick Blick for the discounted price of $133 and change. Successive searches found a number of small workshops making amber linseed varnish at a more reasonable price. I have decided to leave that stage of the process to other craftsmen.
Posted by Russell Maret at 8:48 AM

19 September 2010
A few weeks ago, after reading too much news about various corporate trespasses, I decided that my small autumnal rebellion against corporate malfeasance would be to manufacture my own printing inks. Looking, of course, to John Baskerville for guidance I dredged up T C Hansard's recipe for Baskerville's ink from F. E. Pardoe's biography. Neither Baskerville nor his widow Sarah would divulge the secrets of his lustrous black ink but various sources were culled together into a recipe by Hansard in 1825, fifty years after Baskerville's death. On the surface, the recipe sounds fairly straightforward—a bit of lamp black collected from furnace burners mixed in with thickened linseed oil—but for the one predictable exception: "The oil thus prepared was suffered to cool, and had then a small quantity of black or amber rosin dissolved in it, after which it was allowed some months to subside..." [my emphasis] On a close reading of the recipe, the problems begin to multiply. First of all, what does a small quantity of rosin mean? Is it one part per ten or one part per hundred? The issue is one of elasticity: too much rosin will result in an inflexible ink which could potentially crack when dried. The only way to discover the proper proportion is through experimentation. ¶Second, although I can obtain all of the ingredients Hansard mentions from Kremer Pigments, the staff at Kremer assures me that amber has to be dissolved in turpentine (which is highly flammable and noxious) at a temperature of over 500 degrees fahrenheit. The resulting mixture is a shellac used predominantly in oil painting and violin making. Considering Baskerville's years in the Japanware business it makes sense that he would be well versed in the use of shellacs. But Hansard never mentions shellac. The rosin is not added to the linseed oil as a liquid but as a solid, it is dissolved in the oil. Which brings up the issue of time and heat. Does, "after which it was allowed some months to subside," mean that it took some months for the rosin to dissolve in tepid oil? Was the oil re-heated to aid the dissolution of the rosin and then allowed some months to subside? Against the better judgement of Kremer's clerks, I am opting to stick with Hansard for the moment. I have added 15ml of solid amber rosin to 150ml of linseed stand oil at room temperature. If the amber has not dissolved at all in a week I will try the same proportions over heat.
Posted by Russell Maret at 6:09 PM