First sample setting of Capitals
Most of this past week was devoted to my talk at the Type Directors Club on Thursday and printing an invitation for my godson Coltrane's nursery school. With those tasks complete I have started trial settings of the Latin text of Pervigilium Veneris in 12 didot Romulus. For Bruce Whiteman's translation I have begun drawing a rendition of the upright Italic used by Giovanni Antonio Castiglioni from 1541. [original shown above] This is also the font that I will be using for the notes in Æthelwold Etc.
Posted by Russell Maret at 2:12 PM

One night in the summer of 1995 I was sitting in a playground in Brooklyn with some friends. I was on the jungle gym staring at the red swing set in front of me when I understood, on a visceral level, that red was not a primary color and that the mixing of the "primary colors" into secondary and tertiary colors was not an act of creation but one of re-assembly. That red, yellow, and blue are exhumed or extrapolated from pure light or a primal brown and that the color wheel, when inverted, becomes a more accurate chromatic centrifuge.
Posted by Russell Maret at 10:45 AM

One Weekend Only: Bodoni, Byron, and Bordeaux

Bodoni, Byron, and Bordeaux
March 28 & 29
The Center for Book Arts, 28 West 27th Street, 3rd floor
Join me for a weekend of connoisseurship. We will sample beautiful letter forms, romantic poetry, and delicious wine. Visit the Center for Book Arts for more details.
Posted by Russell Maret at 12:28 PM 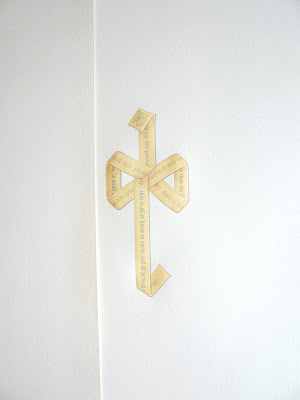 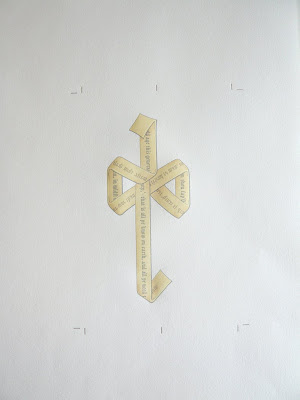 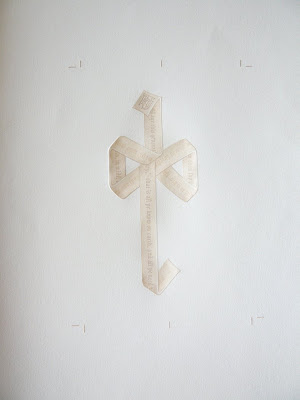 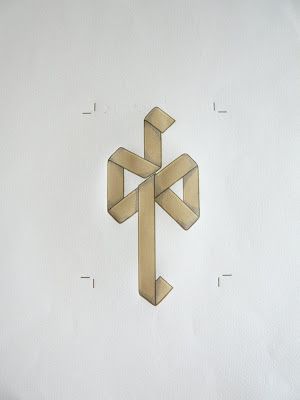 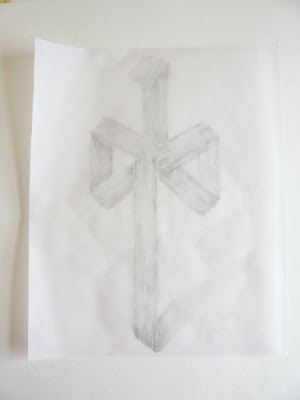 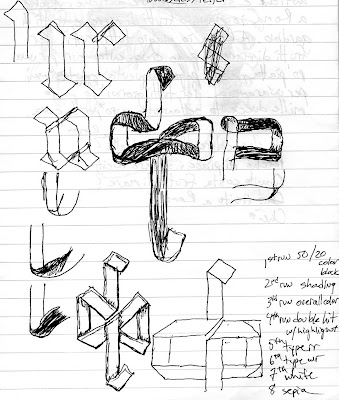 February 20
This week has been devoted to the Æthelwold T. With each letter it is becoming clearer that the secret to overlaying color is the preservation of luminosity. This probably sounds obvious but with four colors of ink printed on top of one another it is remarkably difficult to maintain vibrancy. For the T, I had thought that by overlaying different densities of copper glazing I would achieve the "inner light" that I was after. Instead, the resulting color was bland and lifeless (State 2). Further, the outline and right reading type was not stadning out the way I wanted them to. For the tromp l'oeil to work properly, I needed the ribbon to feel elevated from the page. In the end, I started with a ground of bright lemon yellow overprinted with a pale hot pink scumble (see below). Over these I printed two different shading plates in copper glazes and the wrong reading type in a pale bronze. Interestingly, all of these colors are roughly the same value. It is the altering of hue – rather than contrast in value – that provides the depth. When the outline and right reading type were printed in a contrasting blue-bronze the whole image stood off the page. 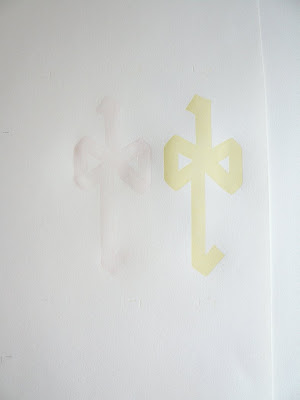 First and Second Plates in Final Colors
Posted by Russell Maret at 11:21 AM

As with static form, a static color composition is either composed of bodies at rest or forces in equilibrium. This is (now) a basic idea and any student of Albers is familiar with it: put x next to y to make it look like z. The purple in this gray draws out the yellow in that green, and they either balance each other or create a friction that, like the best asymmetrical designs, conveys the impression of a whole. So why are color combinations so difficult? Perhaps our approach to color is part of the problem. ¶From childhood we have the tertiary color wheel beaten into us as an unequivocal truth but, however enjoyable that beating might be, I have always held its fundamental proposition suspect. Nothing I have observed in nature suggests that color is an additive process. Although we are able to mix the three "primary colors" into an apparently infinite spectrum, consider approaching the color wheel from the opposite direction. Rather than viewing color as an act of primeval creation consider color as a product of Babel, that once there was a great scattering, a centrifugal propulsion from which we are still returning. When viewed from this perspective, arriving at a harmonious color combination is not a creative act occuring in a vacuum, but a re-assembling of something that was shattered and now is made whole. Consider the possibility that the only primary color is brown, and that red, yellow, and blue are extruded from it as copper ore is from the earth.
Posted by Russell Maret at 4:26 PM 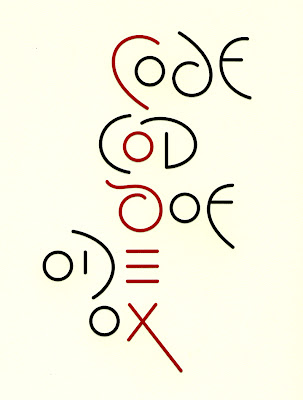 This week was devoted to the CODEX book fair where I displayed the first couple of pages of Æthelwold Etc. The response was very encouraging, to the extent that five of the eight deluxe copies are now reserved. More than sales, though, the event was a remarkable gathering of people: in the same afternoon I discussed my work with Thomas Ingmire, Nicolas Barker, and Johanna Drucker. Though I had a hard time getting around to look at other people's work, the quality of what I did see was unmatched in my experience. I was surrounded by David Esslemont's calligrams, Carolee Campbell's salt-resist Sumi ink paintings, the obsessive compulsive (in the complimentary sense) works of ARC, Richard Wagener's wood engravings, Ken Botnick's ink jet/letterpress combinations, and Johannes Strugalla's phonetic typography. I came away from the fair cursing myself for not being born rich. And completely inspired.
Posted by Russell Maret at 2:35 PM 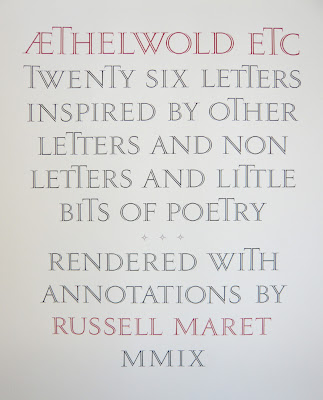 February 5
One of the more adventuresome aspects of Æthelwold Etc is that every letter form in it, including every typeface, will be designed and drawn by me. For each letter composition, there is the letter form itself (A, B, C, etc) and then a title drawn in a different lettering style. Additionally, I am designing an inline titling font for the title page (see above), an upright Italic font for the notes, and a variety of other fonts and alphabets that will appear within various compositions. So far, with only 5 finished compositions, I have designed a Greek majuscule font based on a sketch by Eric Gill for the P, a composite textura font for the T, and a sans serif rendition of Thomas More's Utopian alphabet for the Q. 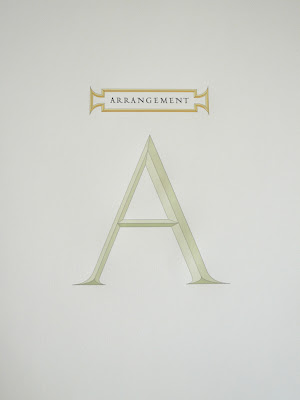 February 4
Finished the eighth and ninth (and final) plates on the A. For the outline of the cartouche I mixed a blue gray to emphasize the different oranges. It reads as the same color as the purple gray that outlines the green letter. The final color of the composition is a rich black used to print the word ARRANGEMENT in letters derived from the capitalis quadrata of Bartolomeo San Vito. Have decided that I don't have the energy to proof the T before leaving for Berkeley Saturday morning. 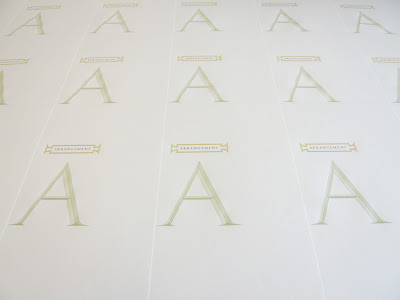 Posted by Russell Maret at 5:00 PM 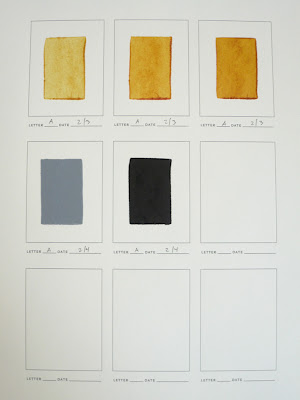 These are the final 5 colors for the A, all of which were used on the top cartouche. The rest of the week will be spent proofing the T and printing an initial version of the title page for CODEX.
Posted by Russell Maret at 2:18 PM

Æthelwold was Bishop of Winchester from 963–984. During this time, the scribe Godeman made a service book for him, known as The Benedictional of Æthelwold. The book is lavishly illuminated with an abundance of gold and the text is laid out using the Hierarchy of Scripts developed by the Carolingians: Antique Roman capitals (or a variation thereof) for titles [in this case all in gold]; an insular uncial hand for introductory matter [in this case a strikingly stylized hand notable for it's unmistakable A]; and a Carolingian miniscule for the body text. It is one of my favorite books. The manuscript is in the British Library and is available in facsimile.
Posted by Russell Maret at 1:51 PM