Committing to spend a year or more working on a single book can be an intimidating prospect, and most book artists I know procrastinate as long as possible before fully committing to work. The hesitation is rooted in an understanding of what a large-scale project entails. It is not simply a question of hard work, that's a given. Rather, working on a "big" book means committing to let a single idea, however rich or complex, permeate and consume every aspect of your life for as long as it takes to finish. It can feel alternately like casting yourself adrift on a calming sea or locking yourself in a windowless room, and the experience of every such book I’ve made has been one of shuttling between calm certainty and existential terror. The time it takes to travel from certainty to terror (and hopefully back again) alternates, but it can be surprisingly short. A good hour of work can be followed by an afternoon of crushing doubt, alleviated by an insomniac insight that often doesn't pan out the next morning.


One reason for this convoluted process is that the book I think I am making when I begin is only part of the book that I end up with when I’m done; and the greatest challenge in the early days of the process is discovering what the book I am making is actually about. This can lead to all sorts of unexpected avenues of inquiry, opening into poignant self-analysis that was not part of the original bargain at all. I just wanted to make a book! But slowly the slog begins to yield results, the ideas get worked out, and the book gradually takes shape.

This was my experience of Character Traits for most of this past January. For weeks, every letterform that I drew seemed to put me one step further from my goal, every day I became more certain that forward progress was impossible. I would spend three days drawing an alphabet for one of the pages, only to realize that it was all wrong. Convinced that I had learned what was needed, I would repeat the process with the same results. The most infuriating part of this kind of struggle, the seeming lack of progress, is knowing deep down that it is actually how one progresses through certain stages of creative work. After three weeks of getting nowhere, I suddenly had six plates complete and ready for printing. I now have twelve plates ready for editioning, all have been proofed, and I’ve begun printing the first one this week. I’ll be showing the prints, along with Amy Borezo’s fantastic binding mock-up, at the ManhattanFine Press Book Fair on March 10th, and the Oxford Fine Press BookFair on the 24th and 25th. Photos of the binding are below. 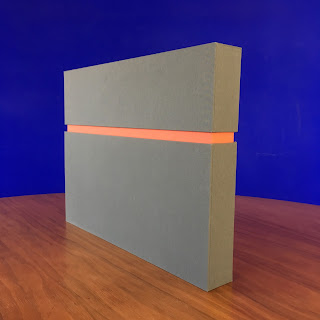 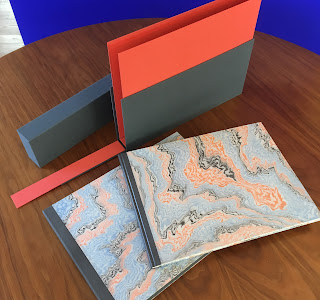